Policy and regulation will impact the business cases of all stakeholders in the shipping sector. It is the key to unlocking finance and investment as well as protecting our planet for future generations.

The following is a selection of current, upcoming and proposed GHG related regulations that will impact global shipping.

“World governments can act decisively in an emergency and climate change has escalated to the level of crisis. Policy response must therefore be accelerated to crisis response level, bringing in emergency measures at regional levels, as was done for Covid-19.” 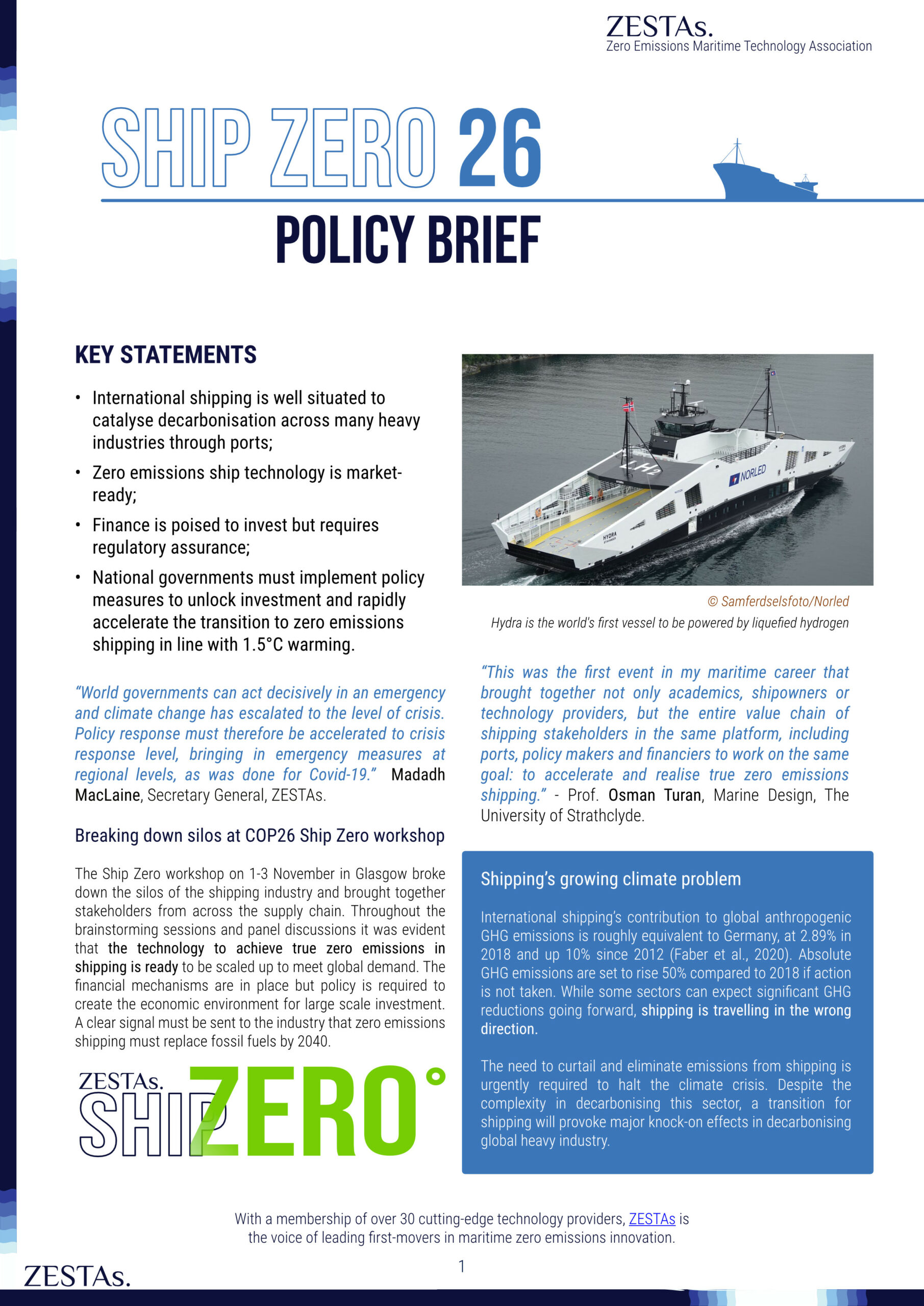 The EEDI is a non-prescriptive, performance-based mechanism that leaves the choice of technologies to use in a specific ship design to the industry. As long as the required energy efficiency level is attained, ship designers and builders are free to use the most cost-efficient solutions for the ship to comply with the regulations.

EEDI is the IMO’s principle technical measure to reduce GHG emissions. EEDI applies to any ship of 400 gross tonnage and above that are engaged in international waters. Requires calculation of Attained EEDI (Regulation 20) and Required EEDI (Regulation 21).

Reduction Factors are in place for reducing ship emissions depending on the implementation phase. Each phase sees reductions of 10% below the reference line.

Requires all ships of 400 gt and above to carry a specific Ship Energy Efficiency Management Plan (SEEMP), the operational energy efficiency measure of the IMO.

An International Energy Efficiency (IEE) Certificate for the ship shall be issued after a survey in accordance with the provisions of regulation 5.4 to any ship of 400 gross tonnage and above, before that ship may engage in voyages to ports or offshore terminals under the jurisdiction of other Parties.

IEE Certificate is valid throughout the lifetime of a ship unless there is a major conversion or change of flag or ship withdrawal from service.

Requires Port State Control (PSC) to conduct energy efficiency inspections. The IEE certificate is the starting point for any PSC inspection. Any port State inspection shall be limited to verifying, when appropriate, that there is a valid International Energy Efficiency Certificate on board.

Requires ships of 5,000 GT and above to collect consumption data for each type of fuel oil they use, as well as other, additional, specified data including proxies for transport work. The aggregated data is reported to the flag State after the end of each calendar year and the flag State issues a Statement of Compliance to the ship.

Shipping companies must create a Monitoring Plan for each ship, based on templates produced by the Commission. Each ship must monitor a number of parameters during each voyage including fuel consumed and Emission Factors of each fuel type and CO2 emissions emitted as well as methodologies for calculating emissions.

Companies should monitor for each ship arriving in or departing from, and for each voyage to or from, a port under a Member State’s jurisdiction. Exemptions are if all of the ship’s voyages during the reporting period either start from or end at a port under the jurisdiction of a Member State; and the ship, according to its schedule, performs more than 300 voyages during the reporting period. (Article 9)

Companies should also monitor annually for each ship, including total aggregated CO2 emissions and aggregated CO2 for each voyage and average energy efficiency. (Article 10)

An annual verified Emissions Report, containing total CO2 emitted and other relevant information including the ship’s EEDI value, must be submitted to the Commission and to the authorities of the flag States concerned. (Articles 11 and 12) The annual Emissions Report will be made publically available. (Article 21).

Adopted at MEPC 72, as part of the Initial Strategy. Sets out the the levels of ambition to reduce GHG emissions.

The target is to reduce the total annual GHG emissions by at least 50% by 2050 compared to 2008, while, at the same time, pursuing efforts towards phasing them out entirely.

Part of MARPOL Annex VI, entered into force in 2021.

Required to be calculated for every ship at its first survey following entry into force of the amendments. This indicates the energy efficiency of the ship compared to a baseline.

Ships are required to meet a specific required EEXI, based on a required reduction factor (expressed as a percentage relative to the EEDI baseline).

Part of MARPOL Annex VI, entered into force in 2021.

Ships of 5,000 gross tonnage and above (approximately those who follow DCS requirements) must determine their required annual operational carbon intensity indicator (CII).

The reduction rates are intended to achieve the levels of ambitions set out in the IMO’s Initial GHG Strategy, in particular, the 2030 level of ambition of reducing carbon intensity of international shipping by at least 40% by 2030, compared to 2008.

A CII rating is given on a scale – operational carbon intensity rating A, B, C, D or E. A ship rated D for three consecutive years, or E, must submit a corrective action plan, to show how the required index (C or above) would be achieved.

Part of MARPOL Annex VI, to entered into force in 2022.

Revision of Energy Taxation Directive to include marine fuel.

Shipping will be included in the EU Emissions Trading Scheme in 2023.

Upcoming amendment to Regulation 2015/757/EU.
All ships above 400 gross tonnage except ice brakers when sailing within the EU and 50% of voyages outside of the EU. GHG reduction target of 40% by 2030.

Includes an ‘Ocean Fund’ for the period from 2023 to 2030, to stimulate innovation in ships and ports.

To be applied from 1 July 2024 onwards, except for category A and B ships constructed on or after 1 January 2017 with an aggregate oil fuel capacity of less than 600 m3.

Bans the use and carriage of HFO as fuel in Arctic waters. Exemptions and waivers mean that a complete ban would not enter into force until July 2029. Carriage of HFO as cargo is not banned.

The IMO member states have agreed to put a price on carbon emissions.

Marshall Islands and Solomon Islands proposed a mandatory and universal $100/ton CO2 equivalent (CO2e) charge on shipping companies by 2025. The majority of funds would go towards climate vulnerable countries, such as SIDS, while another portion would go towards subsidising R&D and deployment of low-carbon technologies and fuels. Source: Informa UK Limited

Mærsk Mc-Kinney Møller called for a $150/ton CO2 tax on shipping fuel. They plan for tax to be implemented at about $50/ton in 2025, then increasing to at least $150/ton in later years. Money raised from the tax would be used to subsidize clean fuels, and, to support developing countries. – Source: Bloomberg –

Trafigura called for a $250 to $300/ton CO2 equivalent (CO2e) tax (or ‘partial feebate’) on shipping fuel that has a CO2e well-to-wake intensity above an agreed benchmark level. Concurrently, when a fuel is used that has a CO2e intensity below the benchmark, a subsidy is awarded. Revenue would be used mostly for subsidies, with further funds going to R&D for zero- and low-emission fuels and supporting climate change mitigation in Small Island Developing States (SIDS).

– Establishes a pathway forward to protect 30 percent of US ocean by 2030.
– Promotes offshore wind energy and other marine energy research. Enhances the fuel efficiency of the fishing vessel fleet.
– Protects marine mammals through vessel speed programs Expands climate mitigation efforts in the Arctic.

It also sets requirements for zero GHG emissions and zero air pollutant emissions from ships at berth or at anchor in ports from 2030.

Aims to increase the use of sustainable alternative fuels in European shipping and ports from 2025 by imposing strict limits on the fuel’s life-cycle carbon intensity in 5-year increments until 2050, when carbon intensity should be 75% compared to the 2020 base year. It covers all energy used on board when the ship is at an EU port and on voyages between EU ports, and 50% of the energy used on voyages departing from or arriving to an EU port.

Applies to all vessels above 5000 GT of any flag sailing in except fishing vessels.

From 2030, container ships and passenger ships at EU ports will also have to connect to onshore power supply (OPS) and use it for all energy needs while at berth, with some exceptions.

The aim ultimately is to include any company that discharged over 26,000 tonnes of carbon dioxide (or its equivalent) in any year between 2013 and 2019. The 26,000 tonnes threshold will likely impact a swathe of shipbuilders as well as top shipping lines.

The US is proposing the inclusion of shipping in the NDC, as defined in the Paris Agreement.

Taxes on greenhouse gas emissions in all sectors have been proposed by a number of US senators. They include:

Manage Cookie Consent
To provide the best experiences, we use technologies like cookies to store and/or access device information. Consenting to these technologies will allow us to process data such as browsing behaviour or unique IDs on this site. Not consenting or withdrawing consent, may adversely affect certain features and functions.
Manage options Manage services Manage vendors Read more about these purposes
View preferences
{title} {title} {title}